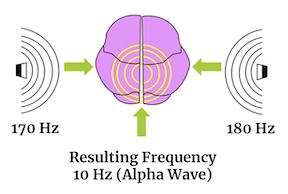 Both Binaural and Monaural Beats involve differing frequencies played on each side of the head to produce the auditory "illusion" of the resulting frequency.

When using Binaural Beats, the frequencies are absolutely separated between each ear, likely by using head phones or an in-ear device.

Since we can surely not fit a singing bowl into our ear, some of both tones will be picked up in both ears, resulting in the similar Monaural beats.